Why Do Incentives Work? The Psychology of Motivation & Rewards

What is an incentive? Anything that motivates a person to perform an action can be considered an incentive. Incentives for eating food include delicious taste and necessary nutrients, for example. An incentive could be an outside reward someone offers you for completing a task (a $5 gift card for submitting a survey), or the reward inherent in doing something (the feeling you get after you volunteer your time at a local shelter). In this blog, I’ll namely be covering the first kind of reward, an outside reward, particularly as a tool in workplaces and customer loyalty. Digging into the question “Why do incentives work?” is fascinating. Understanding how and why incentives work can help you improve employee motivation, customer loyalty, and channel partner relationship strategies.

How Does the Brain React to Rewards?

The study of rewards and motivation is often said to have begun with psychologist B.F. Skinner’s research on operant conditioning in the 1930s. Skinner conducted various experiments on animals performing simple tasks such as pulling levers in exchange for rewards (namely food treats).

Humans are just a bit more complicated than mice, of course. Various studies since Skinner’s have revealed complex findings about humans and how our brains respond to rewards. Most importantly, scientists have a foundational explanation for why rewards work. That answer? A chemical in the brain called dopamine.

What Is Dopamine and When Is It Released?

As neuroscience professor Robert Saplosky discusses in his book Behave: The Biology of Humans at Our Best and Worst, dopamine is the pleasure chemical released in our brains in response to enjoyable experiences, i.e. happy juice. Sex, music, and food all trigger dopamine responses in the brain. The brain also releases different amounts of dopamine depending on the circumstances. As Saplosky explains,

“Show a picture of a milkshake to someone after they’ve consumed one, and there’s rarely dopaminergic activation—there’s satiation. But with subjects who have been dieting, there’s further activation.” 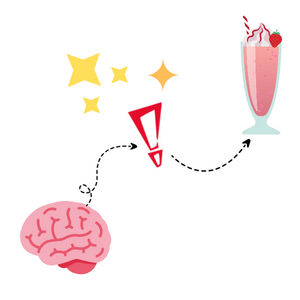 In other words, the happy juice in our brains tells us that something we don’t have is more enjoyable than something we just experienced.

There’s a downside to the brain’s reward system: it will only offer so much dopamine for the same stimulus. Saplosky colorfully describes an experiment in which “A monkey has learned that when he presses a lever ten times, he gets a raisin as a reward. That’s just happened, and as a result, ten units of dopamine are released…Now—surprise!—the monkey presses the lever ten times and gets two raisins. Whoa: twenty units of dopamine are released. And as the monkey continues to get paychecks of two raisins, the size of the dopamine response returns to ten units. Now reward the monkey with only a single raisin, and dopamine levels decline.”

This offers us our first clue in using incentives and rewards to motivate others in a workplace or sales context: the same reward offered over and over will become less effective.

As you can see with the milkshake and raisin examples, the relationship between dopamine and rewards is already getting a bit complicated. We can’t just blindly hand out rewards and trust the fact that dopamine will do the rest of the work to motivate people. This is why you need a reward strategy to go along with your rewards.

How Do You Develop an Effective Reward Strategy?

A reward strategy (or incentive strategy) is a system of rewarding employees, customers, or channel partners for specific actions. Some companies may take an ad hoc approach to their reward strategy, but rewards are more effective if distributed as part of a formal rewards program.

Like any marketing or sales strategy, a reward strategy can get very granular and detailed. You should consider specific goals, budget, your target audience, and how you’re going to measure results or return on investment (ROI). For the purposes of this blog, let’s focus more broadly on some key psychological factors you should incorporate in your reward strategy.

Present with a show of recognition – but not too much.

Along with perceived desirability and repetition of rewards, the way a reward is presented also determines how effective the reward will be. The Incentive Research Foundation conducted an experiment to learn more about the impact of reward presentation. They compared participants’ responses to these four hypothetical reward presentation scenarios:

Rather than collecting the participants’ stated preference among these scenarios, neuroscientists measured their biometric response to each one. This included measuring pupil dilation and whether or not the participant responds more strongly to getting something they desire (behavioral approach system or BAS) versus avoiding something they don’t want (behavioral inhibitive system or BIS).

The results? “Little Show” was the scenario preferred by most participants, which included sales and non-sales individuals, as well as a mix of gender and age. The “Private” scenario was the least popular choice. Other interesting observations included the fact that Millennials showed more preference for “Peer-to-Peer” recognition, and women preferred “Peer-to-Peer” while men preferred “Big Show” and “Little Show.”

These findings offer some guidance on how to present rewards to your audience. Of course, not every group is the same, so you might need to conduct some research on the preferences of those you want to motivate and reward.

Build up anticipation and watch out for expectations.

Remember that experiment Saplosky described earlier, with the monkey pressing the lever? It turns out that, although dopamine release decreases from the act of pressing the lever, there is something else that happens after the experiment has been repeated enough times: the light that comes on, signaling the beginning of the reward trial, triggers a large dopamine release. In other words, once someone fully processes the rules and circumstances of a reward, the anticipation of a reward can be more rewarding than the reward itself.

Not only can reward recipients begin experiencing pleasure from anticipation leading up to a reward, but anticipation and expectation play a role in how much dopamine the brain releases. This is similar to how the things we don’t have (for example, a milkshake when we’re sticking to our keto diet hardcore) trigger more dopamine than things we just experienced. Except, in this instance, the larger dopamine release comes from unexpected rewards. As Saplosky explains,

The lesson here is this: variances in reward types, reward amounts, and timing of rewards can all help make rewards more exciting and motivating. Making changes to the typical reward system (for example, offer pre-season rebates on air conditioners if you typically made the offer during summer) can make the same old reward suddenly much more appealing and effective.

The Endowed Progress Effect is a psychological phenomenon where people are more motivated to work toward a goal if progress toward the goal has already started. The effect was studied and defined by marketing professors Xavier Drèze and Joseph Nunes.

In their paper, “The Endowed Progress Effect: How Artificial Advancement Increases Effort,” Drèze and Nunes observed customers’ response to loyalty cards that offered a free car wash after ten purchases, proven by stamps on the card. Some were given cards that had two spaces already stamped as part of a “special promotion that day.” Others were given a card with eight spaces, but none stamped. The redemption rate for those who had the card endowed with two stamps was 34% , compared to a 19% redemption rate for those with the unstamped, eight-space card.

Even though customers had to make the same amount of purchases for all cards they received, those with the stamped card were motivated by the Endowed Progress Effect.

When you develop a reward strategy, you can incorporate the effect to boost engagement and participation in your program. As a caution: don’t overuse the Endowed Progress Effect or offer it without reason. As Drèze and Nunes noted in their paper, “When no reason is provided, we expect more people to perceive the endowed progress as a marketing ploy designed to lure people into enrolling in a loyalty program.”

So, you know that rewards will trigger happy juice, which will motivate reward recipients to perform an action. You know that psychological phenomena such as anticipation, expectation, and the Endowed Progress Effect can boost the impact of a reward. But which reward should you offer? Well, different rewards have different effects. Some are more effective in certain scenarios than others. Let me explain what I mean by looking at the three most common rewards offered in incentive and loyalty programs.

When should you use them?

Why do they work?

Reward points (can be redeemed for merchandise in an online rewards catalog).
Everyone can choose the reward they want most, whether they prefer redeeming for big items or low-hanging fruit like movie tickets.
Debit or gift cards (virtual or physical, and can be spent in nearly any online or brick-and-mortar store; or gift cards to various stores and brands)
Everyone knows how to use cards, so there’s no learning curve. Debit and gift cards are widely versatile, so the turnaround redemption tends to be short.
Travel opportunities (group travel events, hotel stays, plane tickets, cruises, etc.)
Incentive travel historically has the highest return on investment (ROI) of any reward. It can also lead to long-lasting memories that build lifetime relationships and loyalty.
Why not cash?
Why isn’t cash featured in the reward options above? Cash is generally considered a less motivating and less cost-effective reward than tangible or experience rewards. Studies show that people often work harder for non-cash rewards even when they express a preference for cash. Additionally, participants tend to mentally lump cash rewards in with salary, creating a feeling of expectation and resulting disappointment when the reward isn’t earned.

Rewards and the way humans respond to them can get complicated. Not only must you avoid making rewards feel like a manipulative bribe to start with, you also should avoid overusing the same reward or presenting the reward in a way that makes the recipient uncomfortable. But there are always ways to make rewards even more exciting. There are dozens of ways you can put a new spin on tactics such as the Endowed Progress Effect or anticipation build-up. Get creative and have fun with your reward strategy—that’s the best way to make it as effective as possible.

Want to learn more about setting up a rewards program?

How to Start a Successful Online Rewards Program

A great launch is crucial to a successful online rewards program. From setting up the right goals and incentive rewards offering to marketing and communicating the program to your audience, the beginning is exciting but has to be planned carefully. So how do you pull off the best possible online rewards program launch? Read More!